As I’m entering the final years of graduate school, I’ve been applying for a few typical “pre-doc” fellowships. One of these is the NRSA, which is notorious for requiring you to wade through forests of beaurocratic documents (seriously, their “guidelines” for writing an NRSA are over 100 pages!). Doing so ends up taking a LOT of time.

This got me wondering what kind of success rates these grants have in the first place. For those who haven’t gone through the process before, it’s a bit opaque:

How the NRSA works#

Basically, each NRSA grant is reviewed by a panel of people. They individually review your proposal (which is upwards of 20 pages), and assign it a score in one of several categories. The group then meets, and they give your proposal an “impact score”. This score is then compared with the distribution of scores for all the other proposals in your category, and then a cutoff is made based on the percentiles that they will fund.

Each year, they change the cutoff, and thus the number of NRSAs, that will be funded. Importantly, this also differs significantly by the NIH branch that oversees your application. Some have much higher success rates than others. For those who are curious, I’m putting a list of the NIH acronyms and their respective centers at the end.

I did a bit of digging and found a dataset for NRSA success rates over the last few years. It’s broken down by grant type, as well as by NIH branch. The results are interesting so I thought I’d put them out there.

Note - this dataset and a few others can be found on the NIH website here. I encourage you to check it out! Thank god for open data (even if it’s really hard to find).

First, we’ll do some cleaning to remove annoying things like special characters and spaces. We’ll focus on the “success rate2” variable, which describes the % of proposals that were funded that year.

First, let’s take a look at some general trends over time 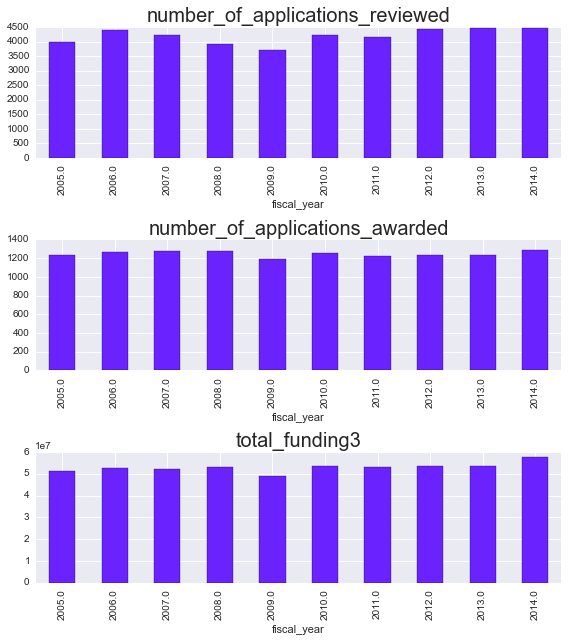 Eyeballing it, it looks like applications have been slightly increasing per year, while applications awarded have remained relatively flat. Let’s dig into that a little bit more. Rather than looking at the raw numbers, we’ll focus on the success rate, or the % of applications that were funded.

We’ll plot the success rates per year, per activity code. I’ll plot a scatter + line for each NIH institute (in color) as well as the mean + a 3rd order polynomial fit for all of them lumped together (in black) 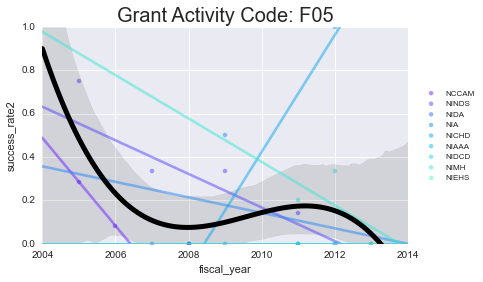 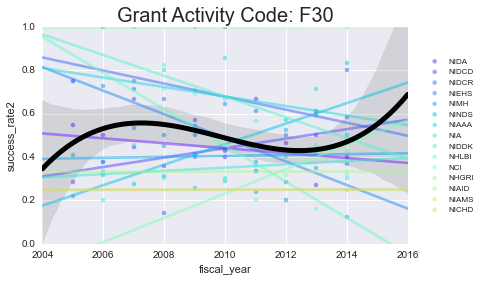 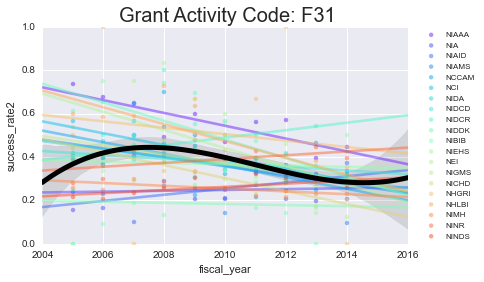 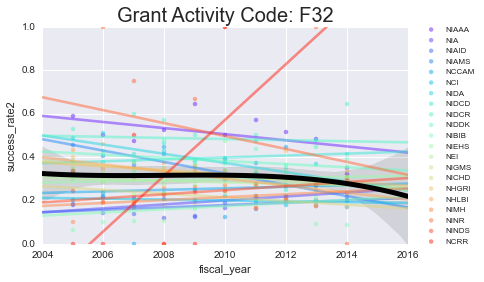 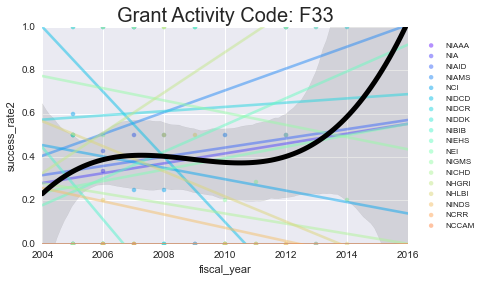 As you can see - some of these data aren’t well-modeled by a line in the first place. That’s because there’s a lot of missing data in here. However, especially for the more common grants (F31, F32) you can see some interesting (and mostly downward) trends.

Digging in to specific grants#

Next, we’ll take a look at some more specific information about a select grant type. I’ll focus on the F31 and F32 because that’s most related to what I’m applying for.

We’ll plot the successrate (y-axis) as a function of year (color) for each NIH center (x-axis). 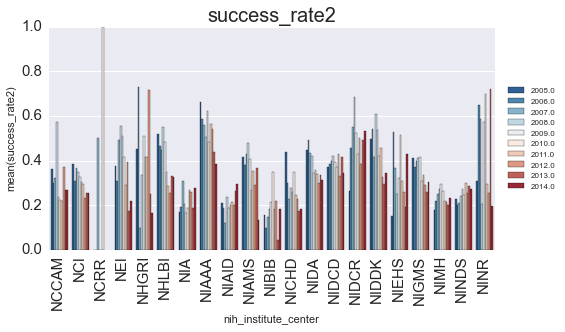 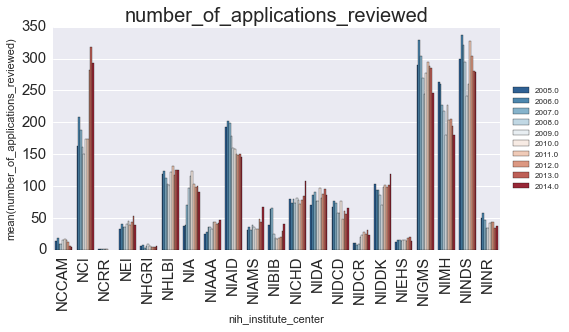 Is there anything that we can learn from this? Let’s look at how the finding changed for each year: 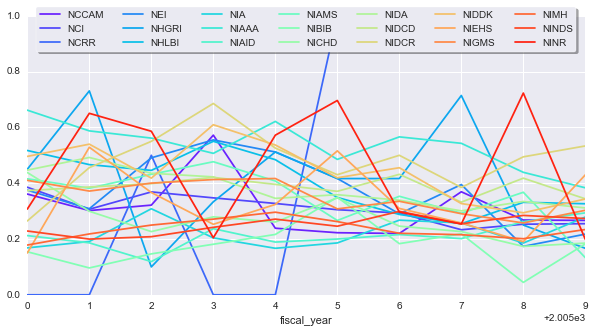 To make things more comparable, we can normalize each timeseries by its first value, this will give everything the same starting point. We’ll also smooth the curves a little bit to get an idea for general trends. We’ll apply an exponentially-weighted moving average so recent points factor more into the average 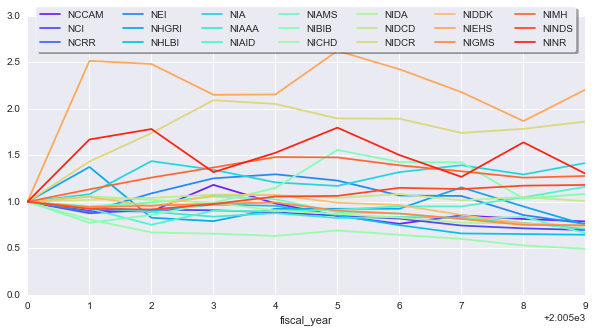 It seems like some NIH groups have made out better than others. Maybe this simply because the number of total applications each received changed from one year to another.

As a final analysis, we can look at how the yearly change in applications is correlated with a success rate. 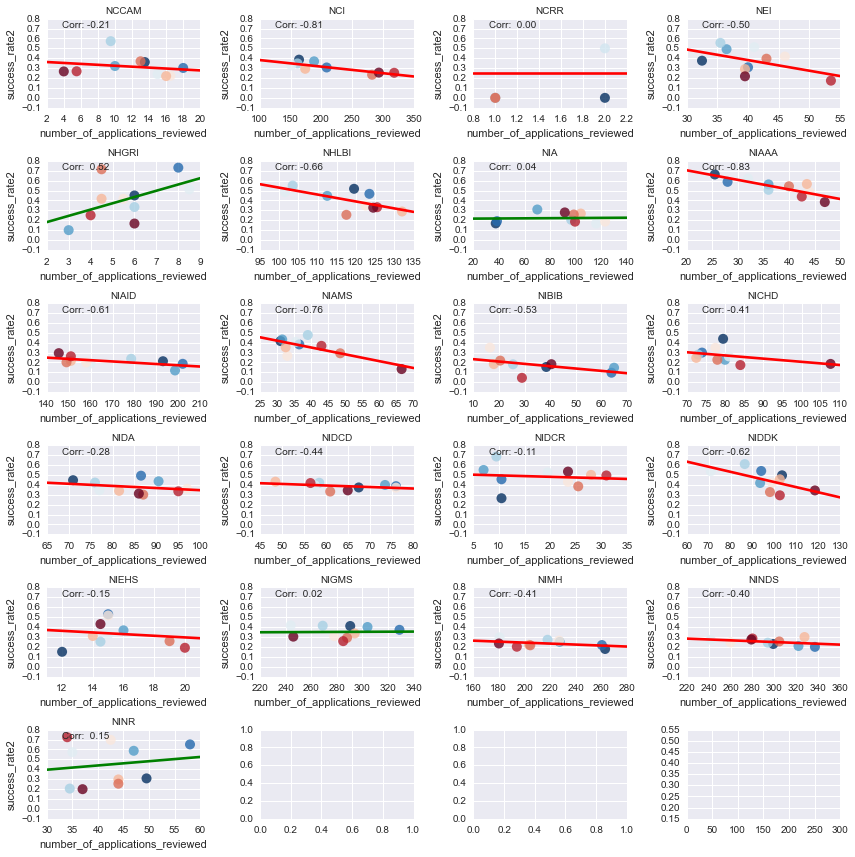 So what did we learn from any of this? Well, it seems like the funding landscape at the NIH is changing, and some groups are making out better than others.

There are power players who’ve been around for a while, like the NINDS, who haven’t seen a huge change in their granting behavior. Other groups, such as NIAAA, have seen their success rates decline steadily w/ increased applications. On the other hand, there are some centers that have actually shown both an increase in applications AND an increase in success rates (such as the NHGRI), which may reflect increased interest in those research endeavors from congress etc.

There’s a lot more to be read into this data, so I encourage people to check it out for themselves, or suggest things to try out on top of what’s already here. It’s been fun learning a bit about the landscape of grants at the NIH.