Using Craigslist to compare prices in the Bay Area#

In the last post I showed how to use a simple python bot to scrape data from Criagslist. This is a quick follow-up to take a peek at the data.

Note - data that you scrape from Craigslist is pretty limited. They tend to clear out old posts, and you can only scrape from recent posts anyway to avoid them blocking you.

Now that we’ve got some craigslist data, what questions can we ask? Well, a good start would be to see where we want (or don’t want) to rent our house. Let’s compare the housing market in a few different regions of the Bay Area.

As a start, let’s take a look at the distribution of home prices to get an idea for what we’re dealing with: 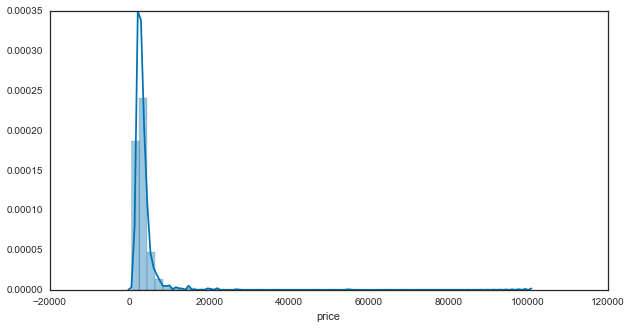 That’s not super useful - it looks like we have a highly skewed distribution with a few instances way out to the right. We’ll convert to a log scale from here on to make it easier to comprehend: 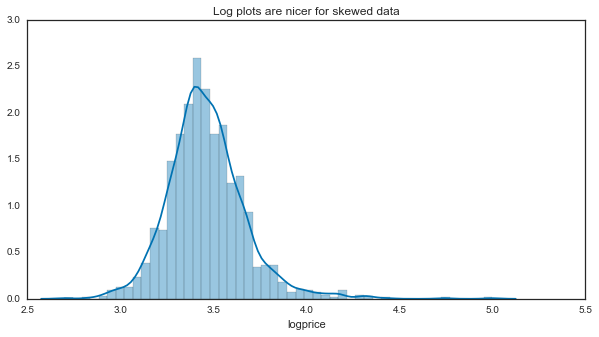 However, what we really want is to look at the breakdown of prices for a few locations in the bay area. Luckily Craigslist stores this in the URL of our search, so we can easily split this up with a pandas groupby: 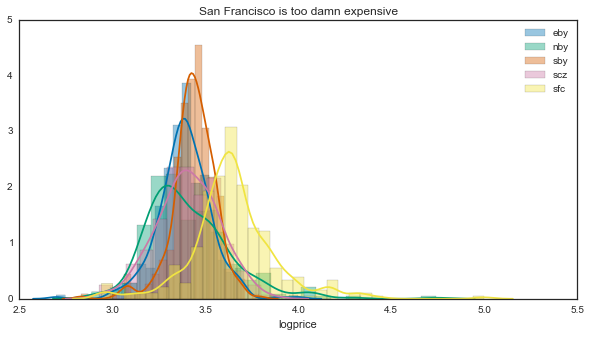 That’s a bit unsurprising - San Francisco is significantly more expensive than any other region in the area. Note that this is a log scale, so small differences at this scale == large differences in the raw values.

However, it looks like the shapes of these prices are different as well. If any of these distributions aren’t symmetric around the center, then describing it with the mean +/- standard deviation isn’t so great.

Perhaps a better way to get an idea for what kind of deal we’re getting is to directly calculate price per square foot. Let’s see how this scales as the houses go up. 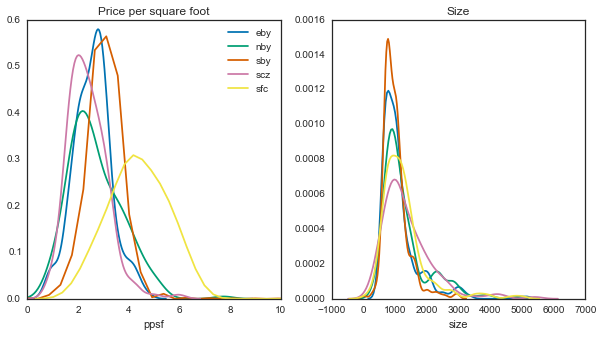 So it looks like size-wise, there aren’t many differences here. However, with price per square foot, you’ll be paying a lot more for the same space in SF.

Finally, let’s take a look at how the price scales with the size. For this, we’ll use a regplot to fit a line to each distribution. 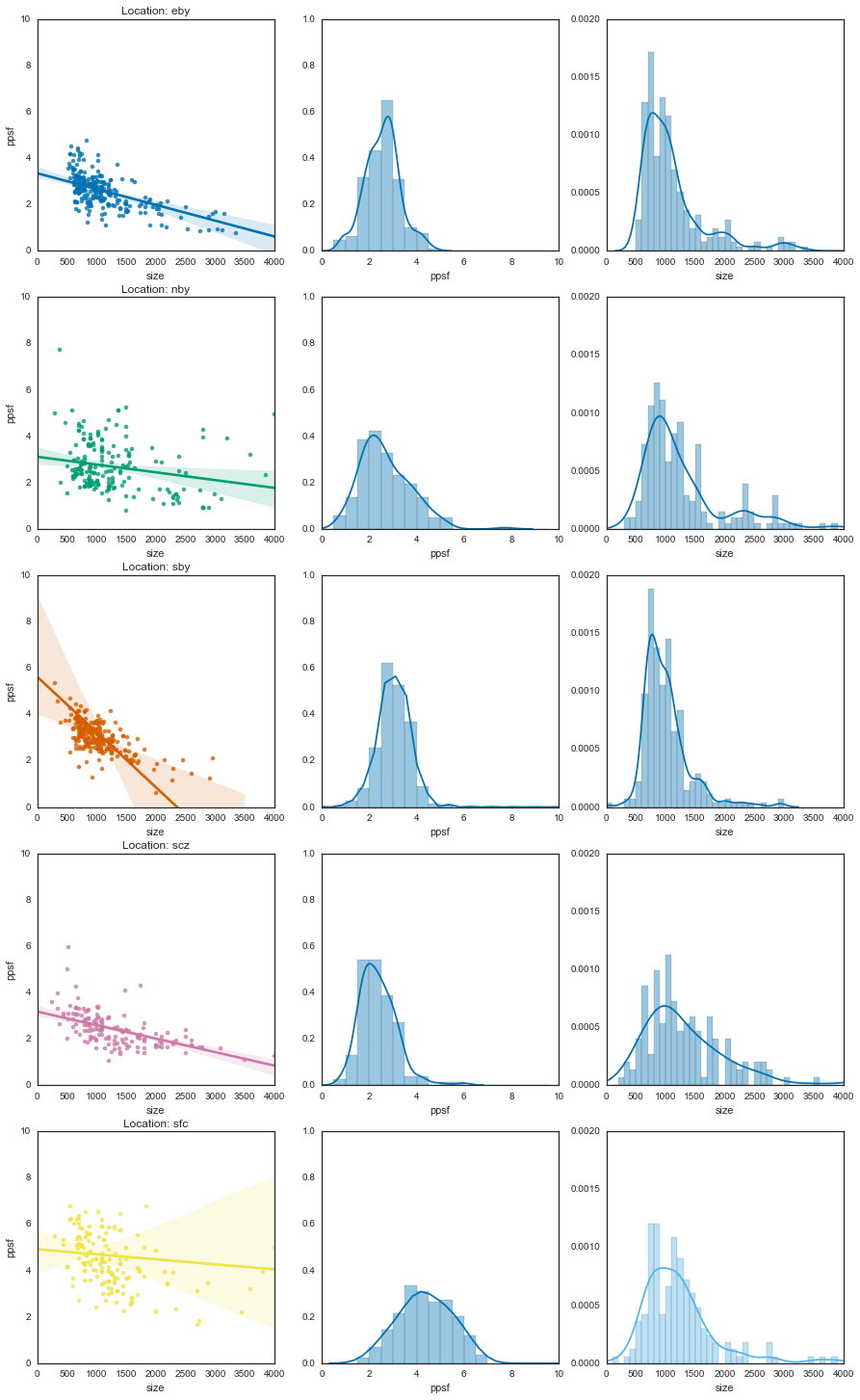 And now on top of one another 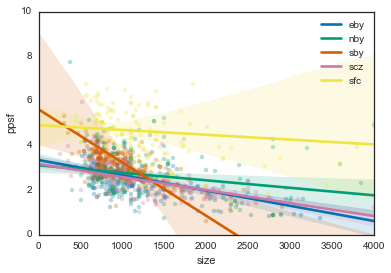 Basically, lines that go down more steeply mean you get a better deal the bigger the place is.

For instance, if you’re in the southbay you might be paying $6/sqf for a 600 sq. ft. place, but $1/sqf for a 2000 sq. ft. place. On the other hand, San Francisco is pretty consistent, with a relatively flat line. This means that you’ll be paying pretty much the same per square foot regardless of how big your place is. In fact, all of the other regions seem to follow the same trend - so if you’re looking for more efficient big-place finds, go with the South Bay.

Also note that this gives us information about the uncertainty in these estimates. The error bars are so wide for San Francisco because we don’t have many data points at high values (because there aren’t that many places >2000 square feet in SF). It’s anyone’s guess as to what this would cost.

Finally, we can also learn a bit from the text in the post titles. We could probably get better information by using the post text itself, but this would require some extra legwork looking up the URL of each entry and pulling the body of text from this. We’ll stick with titles for now.

To do this, we’ll use some text analysis tools in scikit-learn. This is good enough for our purposes, though if we wanted to do something fancier we could use something like gensim, word2vec, or nltk. (we’d also probably need a lot more data).

First we’ll do some quick data cleaning - we’ll only keep datapoints with a title, and then define some characters to remove so that the definition of “a word” makes more sense.

Next, we’ll remove words that are too specific (from a geographical standpoint) to the regions we’re using. Otherwise you’ll just get a bunch of clusters with streetnames etc. predicting the Bay Area region.

Finally, we will vectorize this data so that it can be used with sklearn algorithms. This takes a list of “bags” of words, and turns it into a list of vectors, where the length of each vector is the total number of words we’ve got. Each position of the vector corresponds to 1 word. It will be “1” if that word is present in the current item, and 0 otherwise: 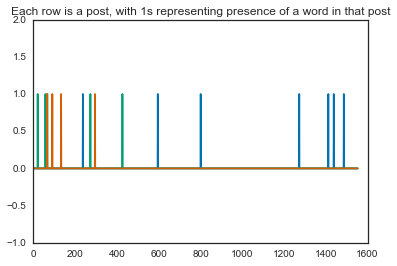 Let’s do a quick description of the most common words in each region. We can use our vectorized vocabulary and see which words were most common.

Then, we’ll print the words that are unique to each area by filtering out ones that are common across locations:

Just for fun we’ll also do a quick classification algorithm to see if some machine learning can find structure in these words that separates one location from another:

Doesn’t look like it (those are horrible generalization scores), but we’ll look at what coefficients it considered important anyway:

You may note that these are quite similar to the words that were unique to each location as noted above - such is the power of machine learning :)

So what have we learned?#

Well, you might say that we’ve merely quantified what everybody already knows: San Francisco is expensive, really expensive. If you’re looking for a place in the Bay Area, you can expect to shell out a lot more for the same square footage.

However, what’s also interesting is that apartments in the Bay Area don’t seem to obey the same rules that other regions do - they don’t necessarily become more economically efficient as the place gets bigger. This is in stark contrast to the south bay, where places are pretty expensive in general, but in ways that you’d expect for an apartment.

Finally, there are probably lots of other cool things that you could do with these datasets, especially if you wanted to break things down by neighborhood and collect more data.