Lately I’ve spent a lot of time trying to reduce the friction involved in deploying Jupyter Book as well as contributing to the project. Features are a great carrot, but ultimately getting engagement is also about lowering barriers to entry and showing people a path forward. Jupyter Book is a relatively straightforward project, but it involves a few technical pieces that can be painful to use (thanks Jekyll).

Recently I experimented with whether we can automate deploying a Jupyter Book online. Using continuous integration / deployment services seems like a natural place to try this out. One can upload a barebones set of code to a GitHub repository, then configure a build system to create a book and deploy it online from there. This blog post is a place to keep track of the current state of affairs for this workflow. 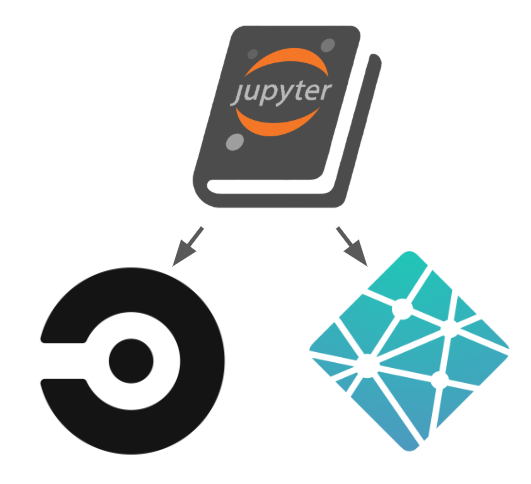 I’ll publish the latest configuration files for this at this repository.

The general set of steps involved#

We’ll start with the simplest possible Jupyter Book configuration: to have a single folder with a collection of content inside. The folder looks like this:

There’s no table of contents, and no configuration file (though we could add these if we wish). If Jupyter Book is used to create a new book with some content, but no TOC is given, it’ll automatically generate one.

Our goal is to do the following in an automated fashion:

Below are attempts to do this with CI/CD. I’ll update this post as new options become available (and hopefully push some stuff to the Jupyter Book documentation).

By far the easiest way to accomplish the above is with the online website provider Netlify. This was my first experience with the Netlify service, and I must say that I was really pleased (thanks to Elizabeth DuPre for the recommendation and Netlify tutorial).

Netlify has automatic deployment built into its service, since that’s the whole point of the site - to deploy websites from online repositories. To do this, I simply had to connect Netlify to my book content repository and tell it to start building a site from that repository’s contents.

I modified the build instructions using a custom “build” command. Netlify runs this command every time it tries to build your site. You can configure this by creating a netlify.toml file and putting it in the root of your repository. Here’s a link to my configuration file.

The full text of that TOML file looks like this:

There are two pieces to this: the command section is the command to run first, when a new commit is pushed to a branch. The publish section defines the location where Netlify will look for the finished HTML (AKA, my book website).

Note that in the jupyter-book create command above, I used --content-folder to tell Jupyter Book to use some pre-existing content when it generated my book template. In addition, note that I could immediately install both Python and Ruby packages - that’s because Netlify’s base build environment has both languages installed already!

One gotcha on getting Netlify to work was configuring it to use a Python 3.X environment. That’s accomplished with the runtime.txt file at this location.

By adding this configuration to my site, Netlify immediately started building and hosting the book. You can find that book deployment here.

CircleCI is a website most-commonly used for running test suites and deploying things into production once those tests pass. Fortunately, deploying an HTML book is pretty similar!

Getting Jupyter Book to build on CircleCI was a little bit trickier for two reasons:

Luckily, working around both of these issues was relatively straightforward. You can find the CircleCI configuration that ended up working in the github repository.

There were two gotchas in there:

Once that was accomplished, this is the configuration that got the job done:

You can find the deployed site at this location.

Ultimately, it was simpler than I expected to deploy a Jupyter Book with CI/CD. There are lots of other services to explore (in particular, TravisCI and GitHub actions), but I find it hard to believe anything would be more straightforward than Netlify.

That said, the process also made it clear that some pieces of the Jupyter Book API are a bit confusing. It felt natural to have my content in a single folder, and to build a book from that content, but this isn’t the “default” way that the documentation recommends. I’ll let these ideas simmer a little bit and we’ll see what comes out of it.

A few recent talks   What would Rust-style governance look like in Jupyter?
On this page
Show Source