Recently I’ve been reading up on governance models for several large-ish open source projects. This is partially because I’m involved in a bunch of these projects myself, and partially because it’s fascinating to see distributed groups of people organizing themselves in effective (or not) ways on the internet.

Why is governance in open projects important?#

Governance is tricky, because there is an inherent tension between:

For most companies and organizations, the above is (sort-of) solved with a relatively hierarchical decision-making structure. The “Chief Executive Officer” can decide high-level directions for the whole company. The team manager can define the priorities for the group.

This generally isn’t the case in open-source, where nobody is beholden to the opinion of anybody else. In this case, leading and decision-making are done by persuading others and building coalitions. The effects of this difference often aren’t felt in the early days of an open-source project, when the team is small, everybody knows one another, and developers often have the same perspective. However, as a project grows in its size and complexity, it becomes more important to create an organizational structure that recognizes, manages, and leverages that complexity.

So, this is why I like Rust’s governance model.

I won’t go into detail about what “Rust” is, except to say that it’s an open-source language that has had a lot of support from the Mozilla foundation. In this case, I’m less interested in the specific technical pieces of that project, and want to focus on the people and the organizations in it.

Here’s the challenge that the Rust community faces:

Because Rust is an open-source language, it has a lot of technical pieces to it that are very diverse in the kinds of demands they have. People working on low-level kernel implementation will have a different perspective from those designing libraries for the language. Moreover, because this language is used by many organizations, there’s a strong diversity in the type of user that make up the Rust community. A open-source lead in a company has a different incentive structure than a researcher at a university.

This means that a single decision-making body would

So, here are two ways that Rust tries to address this problem:

I’ll describe each of these as I understand them so far:

The Rust governance structure is based on the idea that most decisions should not need to be escalated to the highest decision-making authority in the community. Moreover, these decisions need to be made by people with a keen understanding of the details of the problem. Finally, these problems are not just technical in nature, but also span community operations, organization, communication, etc.

Here is a page with all the Rust teams (and their members). 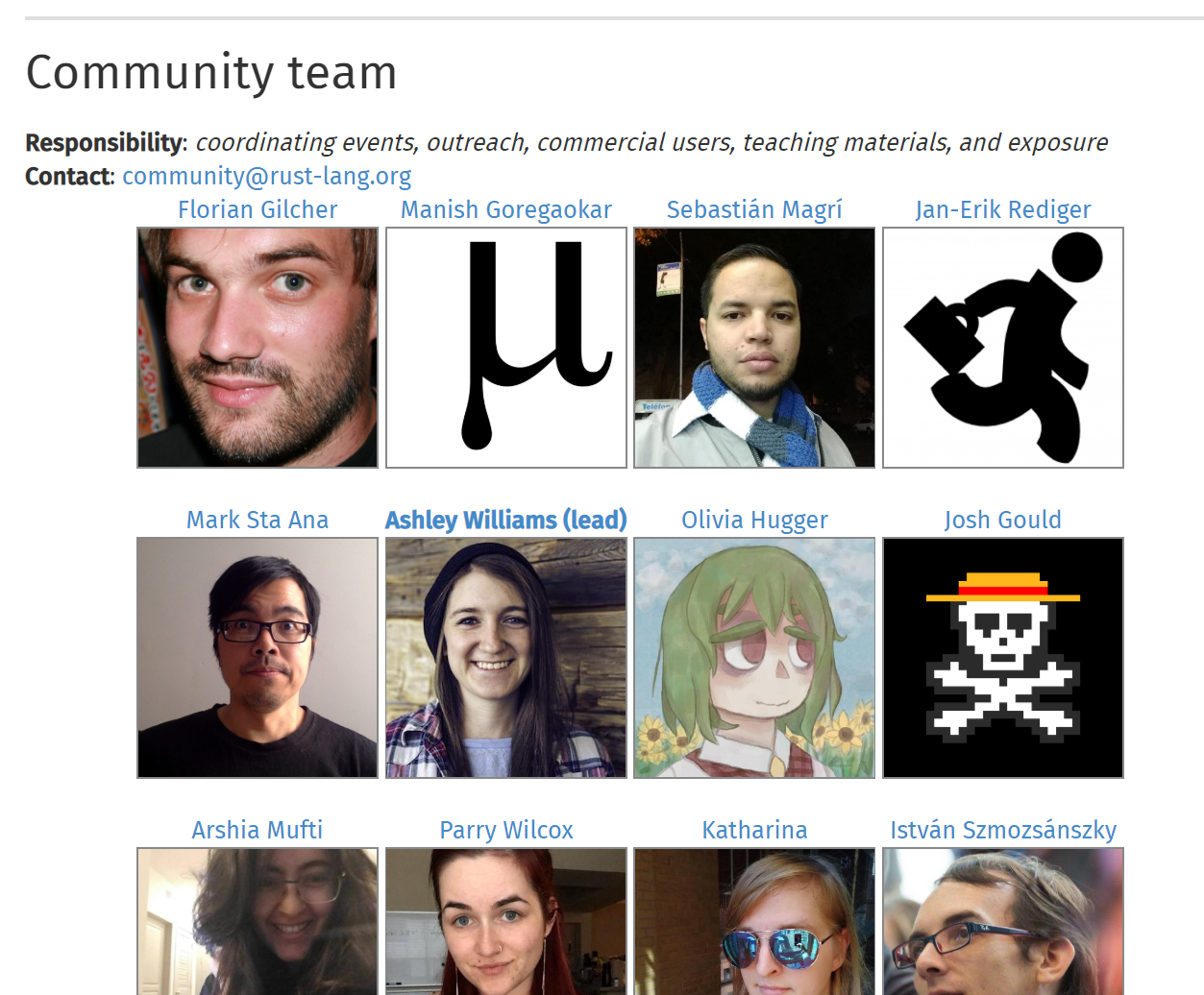 My favorite thing about this structure is that roles within the Rust community are explicitly stated and people performing those roles are explicitly credited with that work. You may notice that a lot of the teams that are listed involve work that is not releasing features of Rust, or writing code. This kind of work is crucial for a community to grow, but is often unrecognized or underappreciated (which has all kinds of implications for diversity and inclusion, but that’s another conversation).

OK, so these teams exist, but do they actually do? That takes us to the second part:

The Rust “Request for Comments” process#

All significant design changes in the Rust community are not be submitted directly as a PR to the codebase. Instead, Rust has a separate repository called rfcs. This repository manages the process by which Rust sub-teams decide whether to support the high-level design of a feature. It’s a process to make a decision about whether something is worth doing (note here that when I say “feature” I don’t just mean code. In fact, the rfcs process itself was an rfc at one point). Here’s how it works:

If someone wants to make a change within the Rust community, they must make a Pull Request to the rfcs repository that proposes this change. They fill out a template (in markdown) that covers things like “why should this change be made?”, “what is this change?”, “what are the alternatives?”, “what happens if we do nothing?” etc.

This person fills out the form and submits a Pull Request. At this point, one of the members of the sub-team associated with the topic of the PR is assigned to be the shephard of the RFC. This simply means that their job is to ensure the conversation moves forward in a transparent and inclusive manner. They are not tasked with deciding or implementing the feature.

Once the PR is made, the pull request enters an “open comments” period where people can discuss the proposal. Often this results in modifications to the PR as new ideas come up and old ideas get refined. Throughout this process, the shephard’s responsibility is to keep things moving forward productively.

Once a member of the sub-team (usually the shephard) believes that enough discussion has happened, they call for a “final comments” period. This is their formal statement that “we’re ready to make a decision, so speak now or forever hold your peace”. If no major new concerns are brought up, the sub-team associated with the RFC then must reach a consensus about whether to merge or close the PR. If the PR is merged, then the Rust community has now officially “supported the idea” in theory. Often this is just the beginning of the hard work, and specific implementations get hashed out in the PR to the codebase.

This process is about giving more power to the Rust sub-teams. In fact, sub-teams can also modify this RFC process for their own purposes.

How do these teams stay on the same page?#

One question you may have from all of this is “how does the Rust community stay cohesive when all the teams are making decisions on their own?”. That’s what the core team is for. In short, the core team is at least made up of leaders from each of the sub-teams within Rust. The job of the core team is to have a global perspective on the Rust community. They make decisions about values that Rust uses in making decisions, and high-level goals that the community should pursue. They also perform project-wide decision making such as creating (or shutting down) specific sub-teams.

I like the Rust community governance structure because it is flexible, transparent, and explicit.

It’s flexible because this structure treats the complexity of Rust as a feature, not a bug. By giving decision-making power to the sub-teams within the community, they’re recognizing the unique perspective those teams bring to the table, and credit them with the ability to make the right decision over their domains.

The governance structure is explicit in that it formally defines roles in the Rust community so it’s clear “who is responsible for what”. Note that many of these roles are of a non-technical nature. These are often “glossed over” in other projects, but they are a crucial part of building an open community.

Finally, the RFC process is transparent in that all discussion happens in the open (on the Pull Request). Moreover, it is also explicit because there’s a clearly-stated process for how these decisions happen. This curbs the possibility that decisions will be seen as made in “back-room” conversations and builds trust in the process.

Over the next few weeks I’ll keep exploring the Rust community’s structure because I think it’s fascinating. Some questions that I’ve still got are:

If anybody has thoughts or comments on the above, I’d love to hear them!

Using CircleCI to preview documentation in Pull Requests   How do projects signal how “open” they are?
On this page
Show Source