Note - you can find the nbviewer of this post here

Coherence vs. Correlation - a simple simulation#

A big question that I’ve always wrestled with is the difference between correlation and coherence. Intuitively, I think of these two things as very similar to one another. Correlation is a way to determine the extent to which two variables covary (normalized to be between -1 and 1). Coherence is similar, but instead assesses “similarity” by looking at the similarity for two variables in frequency space, rather than time space. 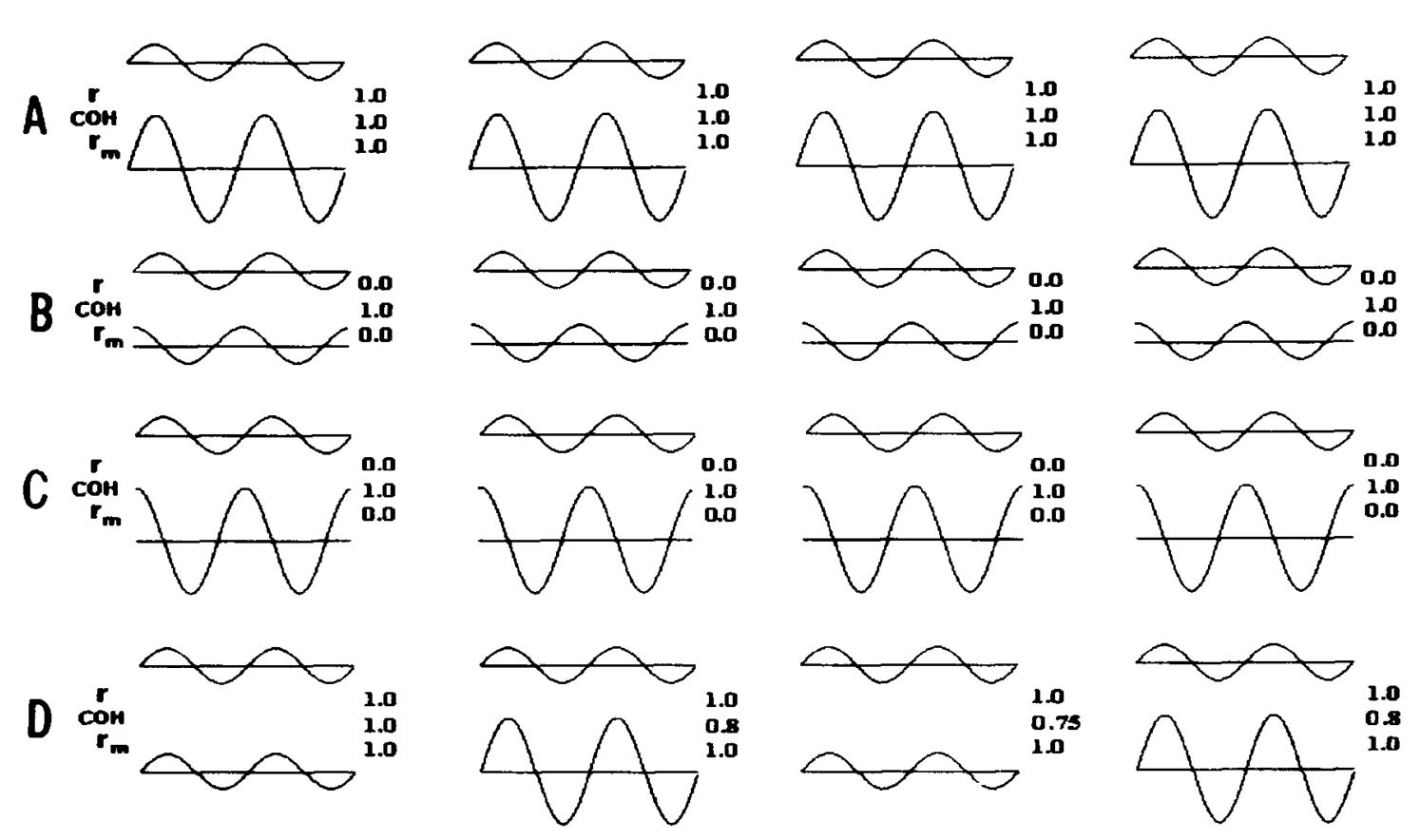 Here I am recreating this result in the hopes of giving people a set of scripts to play around with, and giving a bit more intuition.

First things first, we’ll import some tools to use

Recall that the equation for a sinusoidal wave is:

Now we’ve got a bunch of sinewaves with the parameters chosen above. Next, we will calculate the coherence and the correlation between all pairs of signals. This way we can see how these values change for different kinds of input signals.

First off, we’ll look at what happens to sine waves of varying parameters, for different levels of noise.

Remember, each tuple is (amplitude, phase_lag). The first number controls how large the signal is, and the second controls the difference in phase between two sine waves. 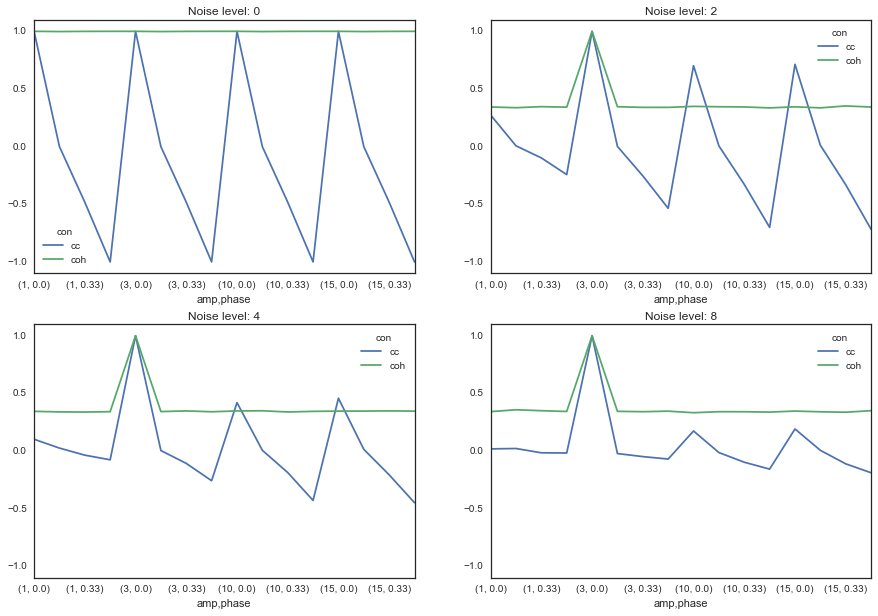 That’s already an interesting picture - as you can see, coherence is far more robust to differences between the two signals. Here are a few thoughts:

To illustrate number 1, let’s plot correlation and coherence against each other: 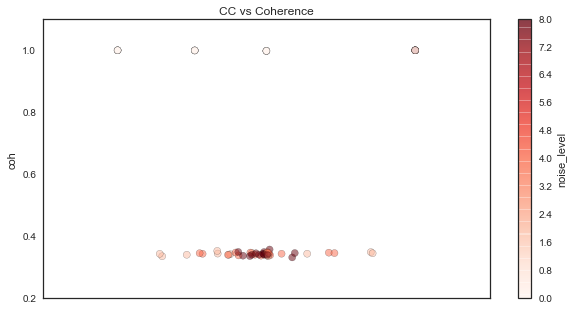 Let’s take a look at how the correlation and coherence relate to the actual shape of the signals: 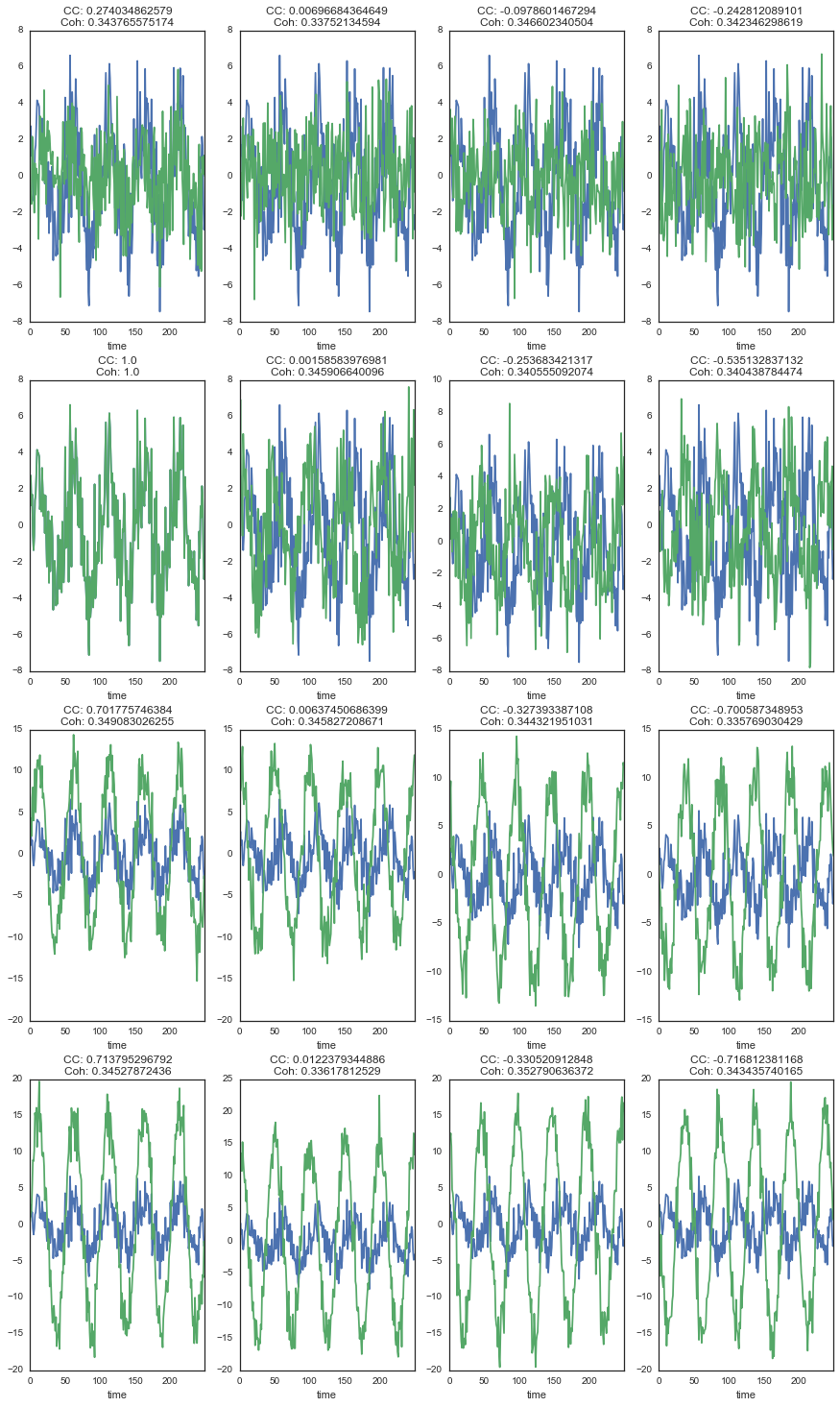 Another way of looking at it with scatterplots…

Finally, for a more direct comparison, we can look directly at the difference between the two as a function of both noise level and the sine wave parameters.

So what does this mean? Well, the relationship between coherence and correlation is too complicated to sum it up in a single line or two. However, it is clear that correlation is more sensitive to differences between signals in time. Coherence, on the other hand, is more reliable for these differences. Moreover, correlation degrades quickly with an increase in noise, while coherence remains the same.

As such, if you care about understanding the relationship between two signals as it pertains to time, then perhaps correlation is the way to go. On the other hand, if you want a robust estimate of the amount of overlap in the structure of two signals, then coherence may be the best bet.